Is time an illusion?

According to the theoretical physicist A. Einstein time is only an illusion. An illusion created by the humankind to organise our perception of the future, the past and now. He is certainly right we would find it very hard to organise our lives without the concept of time as all our civilisation is based upon it. But even if this very concept is just the humankind fantasy – it is certainly a genius one.

Time might be the one of the most difficult properties of the universe to understand. However for our ancestors and majority of present human population it has been a basic concept ingrained through life.

The humankind has forever been aware of evanescence of life. We have observed the progression of irreversible changes in our own bodies and the surrounding world. Everything seemed to have the beginning and the end.  What we had planned for the future was then happening at present and soon after becoming a past memory.  The perception of flowing time as we observed the changes seemed to be an indisputable experience of everyday life. What we had missed was the ability to measure it.

The invention of sundial

By observing the natural world our clever ancestors discovered that celestial bodies moved in cycles which were responsible for patterns of day and night and longer seasonal changes. They have realised that our existence had been naturally divided into the shorter periods by the sunrises and sunsets, the moon phases (months) and orbital movement of the earth (years). We could therefore quantify the passing time by referring to theses natural cycles.

Soon ancient people invented lunar and then solar calendars based on their astronomical knowledge. They could keep track of days, months and years. The need to organise the time more efficiently came with the great civilisations of Ancient Egypt and Sumer around 5000 to 6000 ago. This is when people invented the first sundial clocks. The gnomon was mounted onto the flat plate and as the sun moved so did the shadow cast by the gnomon. The sundials were worthless on a cloudy day and at night. Therefore the ancient people searched for the new ways of time keeping. 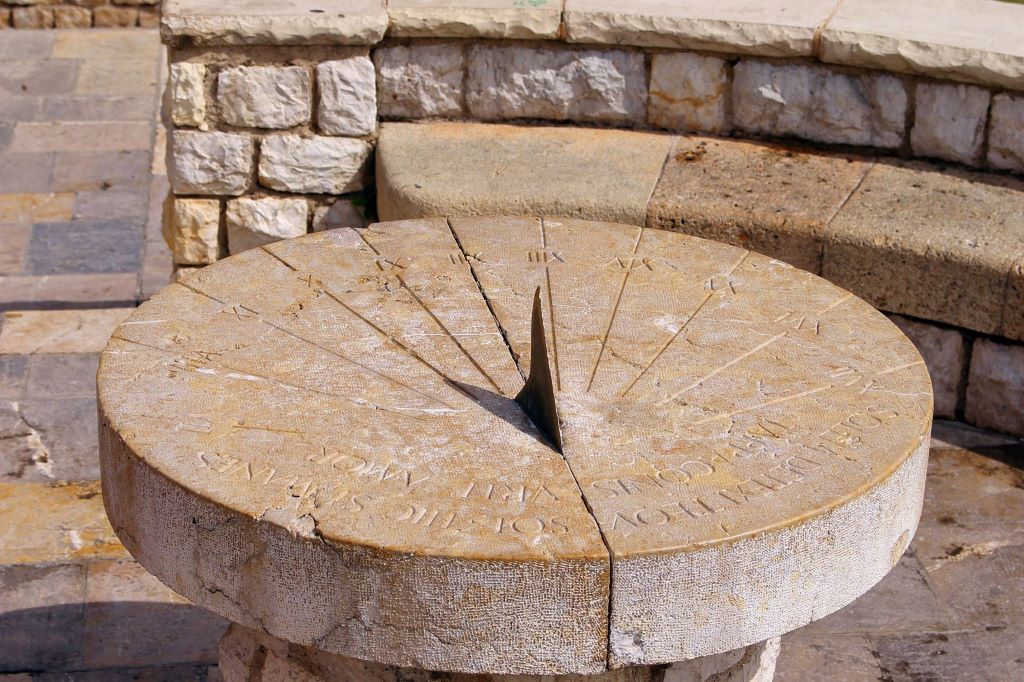 The development of simple water clocks

That is how in the 16 century BC the ancient Egyptians came up with the idea of a water clock. This instrument, known also as the clepsydra, was based on a regulated flow of water. The amount of liquid escaping from or flowing into a calibrated dish let people know how much time has passed.

The accuracy of these first water clocks was far from stable as the flow of liquid changed with fluctuating pressure of the water column.

The invention of hydro-mechanical clocks

Therefore in the coming centuries ancient Greeks and Romans created many much more elaborated devices.  One of the most famous is a water clock invented by the Greek mathematician Ctesibius. This timepiece was most probably the first design with the system of gears, clock dial and an hour hand. Ctesibius also designed the first alarm clock which made noise at the set time by dropping pebbles. Greek engineers were also among the first ones who build the elaborated water towers powered by the flowing rivers.

In the meantime Chinese and Middle East inventors and astrologist created independent designs of timepieces powered by water.  In the 11th century Chinese polymath Su-Song created a very sophisticated astronomical tower clock. This was a 9 meter tall structure with many moving elements including a spherical astrolabe and a rotating celestial globe. It was also equipped with moving figures that rang the bells and showed special times of the day.

Water and sundial clocks continued to be popular until the 15th century. In fact simple water clepsydras has been used to this day in some parts of Northern Africa.

The first fully mechanical clocks were most probably invented around the 14th century by the medieval catholic monks. These impressive timepieces used the verge escapement mechanism and were powered by the balance wheel with weights moved by gravity. Early mechanical clocks were very large in size therefore mainly used in churches and monasteries.

Around 1500-1510 the German clock-maker Peter Henlein designed the spring powered clock mechanism. This invention enabled clock makers to create much smaller portable timepieces which could fit on a shelf or a mantel. Such clocks become desired items among the wealthy and later also among the middle class men.

The main flaw of the above timekeeping solution was its accuracy as some of the first mechanical clocks could loose/gain up to 30 min a day.  The problem was solved by a scientist Christiaan Huygens who in 1658 invented a clock mechanism driven by a pendulum. This was was the most accurate time measuring device until newer technology was introduced in the 1930’s.

Mechanical clocks become an integral part of domestic furnishing since at least the 17th century. People used them not only as the time keeping devices but also as decorative objects. The clock making craftsmen of those times produced some extraordinary pieces in which engineering skill was combined with the elegant artistic design. Many antique or skeleton clocks produced back then continue to impress us with their unmatched beauty, uniqueness and sophistication.

What are you looking for?